Australia’s Good Design Awards is the oldest and most prestigious international awards for design and innovation in the country. The awards celebrate the best new products and services on the Australian market and reward emerging areas of design including business model innovation, social impact and sustainability. The 2019 Awards attracted a record number of submissions with nearly 700 projects evaluated spanning 10 design disciplines including architecture, communication, digital, fashion, product, service, strategy, engineering and social impact.

We are proud to have walked away with not one, but four awards across multiple categories – accolades which recognise our ongoing commitment to deliver sustainable and joyous relationships between the human and natural environments through our designs.

Dr Brandon Gien, CEO of Good Design Australia commented that “The Australian Good Design Award winners this year are an inspiring representation of the future. At the heart of all the winning projects is a problem (big or small) that was solved through clever, considered and meaningful design that will have a positive impact on our lives and our planet.”

Each of the awards received from the Good Design Awards demonstrates the growing acknowledgement from both the design industry and general public, that landscape architects are the right profession to solve the complex challenges of living and thriving in our growingly dense urban environments.

A significant component of Melbourne’s Level Crossing Removal Program consists of new open spaces in the south-eastern suburbs presenting a generational opportunity to both improve public transport facilities and relink communities. By elevating the existing Cranbourne – Pakenham rail line, not only have nine level crossings been removed, but a previously unavailable public open space (linear park) has opened up, generating opportunities for community use and connection under the rail line. The project has delivered 22.5 hectares (more than 11 MCGs) of open space, parklands and new community areas, as well as 12 kilometres of new pedestrian and cyclist paths which is colloquially referred to by the industry as the ‘Underline’.

The core components are three large linear parks and a connecting shared path trail that links them together to create multiple regional path networks. The three new linear parks each have a different role and hierarchy in their respective neighbourhoods. The rail corridor between each station has been transformed into a new public space, with the usual visual clutter of the tracks and associated gantries consolidated on a sensitively designed viaduct, freeing up the ground plane to be developed as a linear park and opening up views along and across the corridor at ground level. The rail corridor has been reclaimed by over 4,200 trees which frame a series of new civic spaces and the 17-kilometre-long Djerring Trail, providing places for recreation, respite, passing through, and pausing.

Urban&Public in collaboration with Adelaide Hills Wine Region has made wine exploration and discovery easier for the general public by guiding them to cellar doors that are virtually hidden in the hills.

A digital cartographic audit provided the basis for 3D terrain mapping and a cross-browser web application. 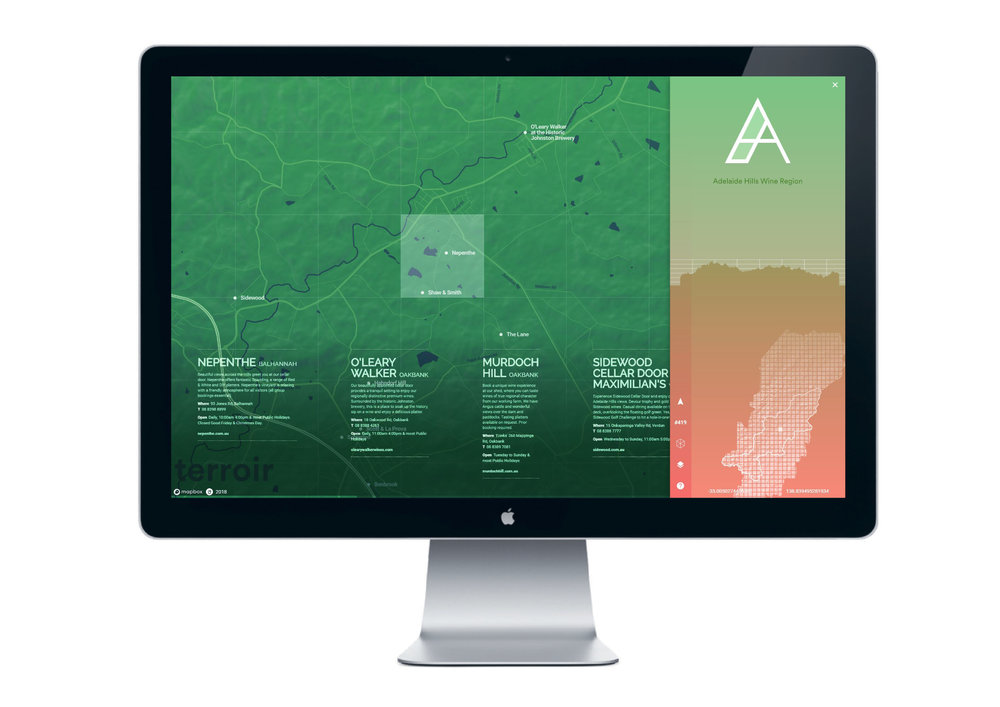 In 2008, Lendlease engaged international architects Rogers Stirk Harbour + Partners to lead the bid team for the master plan of the Barangaroo South. ASPECT Studios and OCULUS established joint venture company ASPECT | OCULUS, to lead the public realm design of the streets, squares, waterfront edges and public places. Barangaroo South brings the vision of a connected, sustainable and innovative Sydney one step closer to reality. ASPECT | OCULUS’ design of the public domain unlocks the unprecedented connection between the city and harbour in this unique precinct, providing an intimate human scale experience, strikingly juxtaposed to the energy and intensity of the CBD.

The opening of Barangaroo South reflects a broader trend to blending urban life where we can work, live and play in the CBD in a collection of high-quality public and private spaces. The design leverages the extension of the city’s street grid into an intimate network of streets and laneways, creating new layers of public activity for the city which respond to topography and circulation. The project introduces balance between density and amenity in a global climate of urban population growth and rapid densification of the city. Disused, disconnected infrastructure has been reimagined as green, thriving and connected public spaces.

Initiated by the Metropolitan Redevelopment Authority, Yagan Square is part of the Perth City Link Project – one of the city’s most exciting redevelopments, reconnecting the CBD with Northbridge for the first time in more than 100 years. Perth’s newest major public space will be a place to have fun, meet, play, eat and shop.

ASPECT Studios together with Lyons and iredale pedersen hook architects completed the design for Yagan Square. Yagan Square was officially opened in March 2018.

The design concepts have responded to the vision of Yagan Square to be an inclusive, welcoming and an active cultural and civic destination representative of a diversity of the local and Perth region and broader Western Australia. The concepts are representative of the ideas of convergence: of geologies, tracks, narratives, indigenous and non-indigenous people and culture within the Square itself.

The wildflower gardens will showcase the unique and diverse qualities of West Australian flora, providing a taste of the West Australian landscape. From the variety of Eucalyptus species found across the State and Perth to gardens that heighten the seasonal characters and colours.

Water also plays a major part in the story of Yagan Square and the unique feature has been developed with Artist, Jon Tarry. As a sequence of connected elements, the water features provide physical and experiential enhancements to the public landscape, encouraging the visitor to look, touch, feel and enjoy.