MORE THAN A YEAR ON, HAS ‘SKY RAIL’ TURNED SUBURBS INTO GHETTOS?

ASPECT insights
MORE THAN A YEAR ON, HAS ‘SKY RAIL’ TURNED SUBURBS INTO GHETTOS?

More than a year after the first train ran along elevated rail lines in Melbourne's south-eastern corridor, residents say "sky rail" has increased quality of life and added to the vibrancy of local communities, and realtors say fears of a property price plunge have been assuaged. Stretches of rail bridges between Caulfield and Dandenong and Cranbourne and Pakenham were part of a $6.6 billion policy to remove 50 level crossings successfully taken to the 2014 state election by the Daniel Andrews-led Labor opposition. But the plan was fiercely opposed by many residents. Some feared commuters would peer into their homes from above, while others had objections to what was described as a visual monstrosity. But 15 months after the first carriage rolled through, even some of those most strongly opposed have come around.

Atsuko Yamada moved out of her old Carnegie home, in the shadows of sky rail, to the neighbouring suburb of Ormond because she feared anti-social behaviour would flourish in the area underneath the bridge, making it unsafe for her kids. But Ms Yamada admits she's changed her tune, and regularly uses the walking path and playground with her family. "I was quite active in attending anti-sky rail meetings and protesting. I thought it had the potential to bring homeless people and crime to the area under the bridge and make the place unsafe," Ms Yamada says. "But now, walking through the area, it feels safer ... it's brought people together and become a place for people to socialise."Glen Eira mayor Jamie Hyams, a Liberal Party member, agrees sky rail has been a "positive experience for the wider community".

"It's certainly improved traffic flow. The area underneath sky rail is relatively new but it definitely shows signs of being a very worthwhile public asset. "He said some residents were angered by graffiti on some sections of the bridge, but the annoyance largely exists at the margins. Elevated tracks tower over the backyard of Helen Franzi, 36, who lives with her two young children in Carnegie, about 15 kilometres south-east of Melbourne. But she is all positive, saying sky rail had drastically reduced noise from passing trains. "I don't have to mute the TV when the freight trains go past anymore. We don't have vases and cups rattling in our cupboards anymore," she says. She says the open spaces – including playgrounds, bike paths and grassy areas – have been embraced by families, creating a "meeting place with a really nice atmosphere"."The kids play basketball and ping pong in the new playground underneath it. It's really busy, there's always lots of kids down there … and I've seen no trouble at all in those areas," she said. 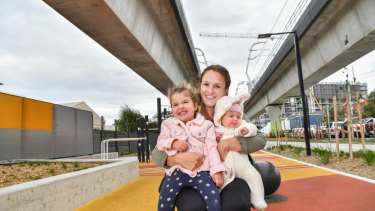 Dianne Liddell and her daughters Lillie Liddell, 2, and Florence Liddell, 4 months, under 'sky rail' in Carnegie. Joe Armao This view is echoed by local mother Dianne Liddell, 37, who lives on the other side of train line. "I think everyone was quite scared of the aesthetics of the environment and that it would attract negative, undesirable sort of people," said Ms Liddell. "But we haven't seen that … a lot of students and families use the areas underneath."Both women say the previously "atrocious" traffic has eased dramatically. Kebebush Elesa owns the Top Fashion clothing store a minute's walk from Noble Park station. "Before [sky rail] there were a lot of homeless people and, you know, drug dealers and young people drinking who came around the area … because the train station was dark and had lots of enclosed spaces," said Ms Elesa. "Now it's very open and spacious – it's become much cleaner. "Sky rail may have helped lift property prices, according to realtor Gary Peer, who owns six offices in sky rail suburbs. "I certainly think it's had a positive effect on the perception of the suburbs. There are some really positive leisure areas underneath sky rail," he said. The original article was published on 12/05/19 by Paul Sakkal on The Age: 'More than a year on, has 'sky rail' turned suburbs into ghettos?'